January 30, 2015 By: America's Infrastructure Report Card
Back to News 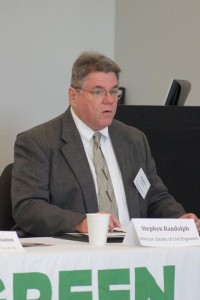 Steve Randolph P.E. is an active member of ASCE’s St. Louis section, where he is currently the section president. He is an Environmental Project Manager at Horner & Shifrin, Inc., a multidisciplinary engineering firm in St. Louis, Mo. As a project manager, he is responsible for planning and executing environmental engineering projects according to schedules and budgets. His specialty areas include storm water management, flood studies, and water distribution.

If you are interested in becoming involved with ASCE’s Key Contact Program and promoting the profession through advocacy, learn more information and sign up at asce.org/keycontacts.

How did you become interested in and get involved in advocacy for your profession?

I’ve always had an interest in politics and seriously considered political science as a major in college. Joining the St. Louis Section’s Government Relations Committee seemed a perfect way to meld my interest in politics to my profession of civil engineering. Also, becoming a Key Contact was one of the earliest and easiest ways to get started in this area.

What issues have you highlighted/focused on when communicating with your legislators?

I’ve pretty much stuck to issues that are in line with the Society’s initiative to raise the grades on America’s infrastructure such as surface transportation, the Highway Trust Fund and the Water Resources Reform and Development Act. In my home state of Missouri, I was involved in our State Infrastructure Report Card and participated in a legislative drive-in where our group lobbied for a bill that would fund transportation infrastructure with three-quarter cent sales tax. I’ve also had a couple of letters to the editor and op-ed pieces published in the St. Louis Post-Dispatch.

What levels of government have you focused your efforts on?  (Local, state, federal) Is there something that prompted you to focus your efforts there?

My efforts have been at state and federal level. That seems to be where most of the funding originates. On the federal level, I’ve participated in three legislative ASCE Fly-Ins and participated in local events by Missouri’s Senators Claire McCaskill and Roy Blunt. I also keep in touch with my Congressman Lacy Clay’s Legislative Counsel, Pauline Jamry. Last November, I represented ASCE at an event called, “Repair America Infrastructure Roundtable.” This was an event sponsored by the BlueGreen Alliance and Repair America to inform the public about the importance of infrastructure investment as it relates to our nation’s economy and job creation.

I’m currently working with ASCE’s Government Relations staff to help set up a joint breakfast meeting sponsored by ASCE, the St. Louis Chamber of Commerce and the Associated General Contractors of St. Louis.  Building America’s Future is providing former Transportation Secretary Ray LaHood as the keynote speaker. We will present our State Report Card at the event and have a panel of local experts to discuss the importance of infrastructure funding to the local economy. Hopefully it will also promote the proposed three-quarter cent sales tax issue that I mentioned earlier.

Do you offer your expertize beyond that of a traditional citizen lobbyist for the public’s benefit (i.e. media interviews)?

I did a couple of newspaper interviews when we rolled out the Missouri State Infrastructure Report Card but nothing beyond that.

How do you gather information and prepare to do your advocacy work?

The issue briefs distributed at the legislative ASCE Fly-Ins are a great source of information as are the weekly “This Week in Washington” email newsletters. The ASCE, Politico and Washington Post websites are also great resources for federal issues. ASCE’s Government Relations Staff in Washington, D.C. is invaluable. Whenever I’ve asked them for help, they are always ready, willing and enthusiastic to assist.

On the state and local level, our local newspaper, the St. Louis Post-Dispatch, is my main resource. ASCE’s State Government Relations Staff is top-notch and always eager to help.

What have you learned through your activities as an ASCE advocate and citizen lobbyist?

I’ve become much more aware of the inextricable link between infrastructure and the economy. You cannot have a thriving economy without first-class infrastructure. I’ve also learned that our legislators want to hear from their constituents. My encounters with my state and federal representatives as well as their staff have always been pleasant and friendly.

Has the experience helped you improve skills you utilize personally or professionally?

What has been challenging about being an advocate? What methods have you found effective in working through those challenges? What sort of pitfalls or setbacks have you encountered?  And how did you overcome them?

The hardest part is just getting started. You need to fight the urge to sit on the couch and be a spectator. It helps to have colleagues that share your interest because you can encourage one another and provide support. Randy Perkinson of the St. Louis Section was a great mentor on my first legislative ASCE Fly-In. He really helped me navigate my way on Capitol Hill and through the meetings with legislators and staff. The St. Louis Section’s Government Relations Committee also provides leadership and support. Dennis Boll, our Committee Chairperson, is passionate about infrastructure advocacy and his enthusiasm is contagious. Having younger members involved also helps to work through challenges because you assume a mentorship role that keeps you engaged. For example, our legislative drive-in included two of our Section’s younger members, Alison Graves and Kyle Klues. This was their first time meeting with their state legislators and it was a lot of fun guiding them through the experience and providing advice when requested.

One setback for the St. Louis Section occurred when one of our U.S. Congressional Representatives (Rep. Russ Carnahan-D) lost his bid for reelection in 2012. We had established a good working relationship with Rep. Carnahan and his local staff and had engaged them in discussions to arrange a series of speaking engagements in the St. Louis area to promote infrastructure investment. Unfortunately, due to redistricting by the state legislature, Rep. Carnahan’s district was redrawn so that he would have to run against another Democrat (Rep. Lacy Clay) in the primary and Rep. Carnahan was defeated. Our plans grinded to a stop and we have yet to get them rolling again. We’ve made some overtures to Rep. Clay’s office but have yet to create the same working relationship with Mr. Clay that we had with Mr. Carnahan. We’re considering changing our strategy with Representative Clay to try and engage him on Science, Technology, Engineering and Math (STEM) issues rather than infrastructure. Indications from his staff indicate that STEM is a topic on which he may be more interested.

What have you found rewarding about your efforts? Have you felt that your efforts have made a difference?  How? Is there a particularly memorable experience you can share?

My advocacy efforts are rewarding to me because I do think they make a difference. I think it’s easy to sit back and criticize our politicians and the legislative process but I don’t think that’s a very effective way to promote change. I’ve found that the idea of infrastructure investment has bipartisan support but that both sides don’t always agree on how to fund the investment. I think it helps that ASCE supports all manners of investment and is open to a variety of methods including user fees, tolls and public-private partnerships. I think that helps our voices be heard when we talk about infrastructure issues.

My most memorable experience was my first legislative ASCE Fly-In (2012). It was my first trip to Washington D.C. and I was excited to finally visit our nation’s capital. That year, on the first day of the ASCE Fly-In, there was an event called “Rally for Roads” taking place on the National Mall. ASCE members that were in D.C. that morning were encouraged to attend. Randy Perkinson and I had an early-morning flight that day and arrived in Washington with just enough time to catch a cab and make it to the rally. Arriving at the National Mall, under the shadow of the Washington Monument and joining the hundreds of people gathered there in support of the transportation bill was invigorating.

What advice would you give to someone interested in getting involved in advocacy?

Jump in, the water’s fine. Start with becoming a Key Contact and subscribe to ASCE’s, “This Week in Washington.” Volunteer for your Branch or Section’s Government Relations Committee. I think once you get started, you won’t want to stop.