ASCE Endorses an UPDATE to the Gas Tax 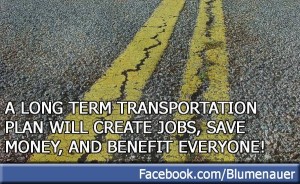 Twenty-two years ago ‘I Will Always Love You’ was the top song on the Billboard charts, a loaf of bread cost $0.75, and Unforgiven won the Oscar for Best Picture. A lot has changed since then, yet the gas tax rate that funds our transportation system has remained the same. Yesterday, the American Society of Civil Engineers stood with Congressman Earl Blumenauer (D-OR) in support of a bill that would change that.

Rep. Blumenauer, along with more than 20 cosponsors, introduced the “Update, Promote, and Develop America’s Transportation Essentials” (UPDATE) Act. UPDATE offers a long-term, sustainable solution to fix the Highway Trust Fund by increasing the gas tax to recoup the purchasing power it has lost due to inflation since 1993. The bill proposes the gas tax to be raised 5 cents per year for the next three years, then tie it to inflation.

With one in nine bridges in the U.S. structurally deficient and congestion on 42 percent of America’s urban highways, our country is in need of an increased investment in our transportation system.

ASCE’s Executive Director Tom Smith joined representatives from the U.S. Chamber of Commerce, the American Trucking Associations, and other groups to support the bill. In his remarks, Smith said:

“The federal motor fuels tax, which funded the creation of America’s Interstate Highway System, hasn’t been increased in over 20 years and has lost more than one-third of its purchasing power.  Essentially, we’re trying to pay for 2015 infrastructure with 1993 dollars.

“This bill will provide long-term, sustainable funding to meet identified needs and revitalize our nation’s transportation network for decades to come.”

Without Congressional action, the Highway Trust Fund’s authorization expires in May, and the funding will run out in the summer—during the height of road construction improvement season. Rep. Blumenauer’s bill would ensure the trust is restored in the Highway Trust Fund, by allowing states to effectively plan long-term projects knowing the federal government will be a continued partner in funding.

Prev Story: USDOT Proposes We Move Beyond Traffic Next Story: This Week in Infrastructure: Federal Funding Proposals Outline Roadmap for the Future