April 26, 2012 By: America's Infrastructure Report Card
Back to News

ASCE has released the latest report in the Failure to Act economic study series today – Failure to Act: The Economic Impact of Current Investment Trends in Electricity Infrastructure. This report assesses the nation’s aging e 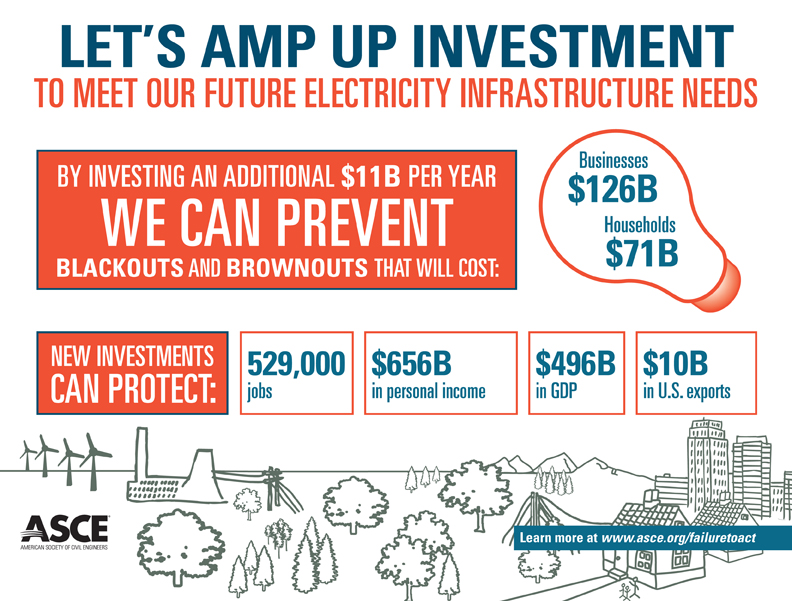 nergy facilities and analyzes how accelerating investments in the nation’s transmission, generation, and distribution systems will prevent unnecessary costs to businesses and household budgets by 2020. This report follows two other economic studies that focused on the nation’s surface transportation systems and the nation’s drinking water and wastewater systems.

ASCE’s 2009 Report Card for America’s Infrastructure gave the nation’s energy system a D+. To better explain how the Report Card’s grades affect America’s economic future, ASCE has produced the Failure to Act series of economic reports focused on the real effects on our nation’s economic performance if the nation continues to under invest and defer spending on our energy grid.

This report concludes that by extending current investment trends for the nation’s energy assets through 2020, the U.S. would be investing $566 billion but that would still be $107 billion below the needed investments. To close this gap, an additional $11 billion in new funding annually is needed to decrease brownouts and blackouts and save American businesses $126 billion, prevent the loss of 529,000 jobs, and save $656 billion in personal income loss. America’s economic competitiveness would also benefit by protecting $96 billion in Gross Domestic Product (GDP) and $10 billion in revenue from U.S. exports.

ASCE held a discussion with a panel of experts this morning to release the report and discuss the energy infrastructure needs for the nation. The panel was moderated by ASCE President Andrew W. Herrmann P.E., SECB, F.ASCE, and included two former FERC Commissioners, Jim Hoecker and Curt Herbert Jr.; as well as Otto Lynch, who heads the energy section of the ASCE Report Card for America’s Infrastructure, and Samir Succar, a scientist at the Natural Resources Defense Council.