September 11, 2014 By: America's Infrastructure Report Card
Back to News

As a part of what the White House has deemed its “Year of Action” campaign to move policy ideas and initiatives forward in the face of Congressional gridlock, the Obama Administration recently held an Infrastructure Investment Summit aimed at soliciting ideas on how to better leverage available financing to deliver projects in the transportation, water, telecommunications and energy sectors.  Participants included cabinet secretaries from the departments of Treasury, Transportation and Commerce as well as leaders from industry, finance, philanthropy and state and local government. Two ASCE members, Anthony Bartolomeo, P.E., F.ASCE who is chairman of the Society’s Industry Leaders Council and Robert Victor, P.E., F.ASCE who chairs ASCE’s Committee on America’s Infrastructure which produced the Society’s national Infrastructure Report Card, participated in the day-long summit with Bartolomeo moderating a small breakout session with Treasury Secretary Jack Lew and Transportation Secretary Anthony Foxx in attendance. The goal of the meeting was to identify barriers to accelerating private investment in the US infrastructure network and develop strategies to further deploy the billions of domestic and foreign dollars currently sitting on the sidelines.  The summit will inform an interagency report on the topic which is due for delivery to President Obama on November 14, 2014. 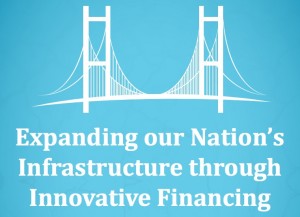 Using the summit as a platform for announcement, the U.S. Department of Transportation (USDOT) declared a $950 million TIFIA loan would be provided for the Orlando, Florida Interstate 4 highway project, which signifies the biggest TIFIA loan to date for a public private partnership (P3). USDOT also announced that it had cleared efforts by Pennsylvania DOT to utilize a $1.2 billion private activity bond allocation to replace more than 500 small bridges within a P3 arrangement. USDOT has recently launched the Build America Transportation Investment Center which released at the summit model P3 contract provisions in order to better assist project sponsors with the guidance and technical assistance necessary to complete highway toll concession arrangements. The topic of P3s is certain to receive further attention in the weeks ahead as the U.S. House of Representatives Committee on Transportation & Infrastructure is slated to release a bipartisan report on the topic which will inform their work on accelerating private sector investment in infrastructure.

Prev Story: ASCE Submits Comments to US EPA on the Use of QBS to SRF Programs Next Story: Investment in Water Infrastructure Works