September 26, 2013 By: America's Infrastructure Report Card
Back to News

During his remarks Mr. DiLoreto emphasized the need for Congress to identify a long-term funding solution for the nation’s surface transportation programs in order to guarantee increased revenues for the 2014 reauthorization bill. DiLoreto also outlined the current state of the nation’s infrastructure by referencing the 2013 Report Card for America’s Infrastructure and explained to the panel the economic consequences of inaction. 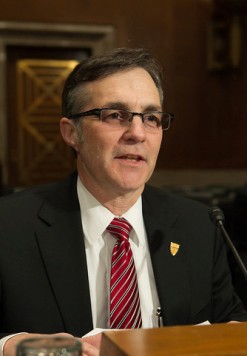 At the opening of the hearing Chairman Barbara Boxer (D-CA) raised the idea of replacing the gas tax with a “percentage fee that is paid for at the refinery level” and went on further to state that she is leaning toward doing away with the gas tax and replacing in with a sales tax. The suggestion was received with a grain of salt from panelists, who continued to urge that an increase in the gas tax is the fastest way to bring revenues back into the Highway Trust Fund. ASCE and others on the panel believe that all funding options must be considered for the long term viability of the Highway Trust Fund, however if revenue is not raised by 2015 transportation programs across the country will experience a 92% cut.

Highways and Transit Subcommittee Chairman and Finance Committee Chairman, Max Baucus (D-MT) spent his time during the hearing to share with the panel that he would like to mark up a tax reform bill this year that would include a fix for the Highway Trust Fund. Baucus also acknowledged that tax reform will likely not happen this year and therefore stated that another temporary transfer from the General Fund might be required. Baucus also made it clear that he thought fixing the Highway Trust Fund “could be an engine that pulls a train here” — in other words, moving as a stand-alone — “because people do want to solve this, and they know it has to be solved.”