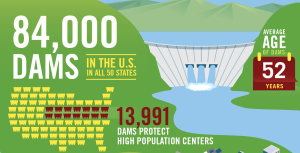 Extreme storms in Texas and Oklahoma are testing the strength of many dams this week. Our thoughts are with those affected, and it is hoped that there are no dam failures contributing to the challenges these communities face. Such failures have had dire effects; it was this same week back in 1889 when the worst dam failure in U.S. history occurred – known as the Johnstown (Penn.) Flood – when the South Fork Dam failed killing more than 2,200 people. On Sunday – May 31st –we commemorate this day as National Dam Safety Awareness Day to remind ourselves of the lessons learned after that failure.

As we approach National Dam Safety Awareness Day, it’s important to take a minute to underscore the state of dam infrastructure across the nation, given a “D” grade in the Infrastructure Report Card.

Dams are an extremely important part of this nation’s infrastructure—equal in importance to bridges, roads, airports, and other major components of the infrastructure. They can serve several functions at once, including water supply for domestic, agricultural, industrial, and community use; flood control; recreation; and clean, renewable energy through hydropower. However, dams also pose a tremendous potential hazard to downstream residents and infrastructure, so dam owners and regulators must observe proper safety methods to maintain these important functions and minimize downstream risk.

Could the South Fork Dam failure happen today? Advances in dam safety engineering practices and regulation coupled with emergency action planning make living near a dam safer. Historically, dams that failed had some deficiency, which caused the failure. These dams are typically termed deficient. Currently, there are about 4,400 deficient dams in the U.S. There are dams with this classification in nearly  every state. (A majority of states and federal agencies define a deficient dam as one that has been found to have hydraulic or structural deficiencies that leave it more susceptible to failure.) Lagging behind is the number of deficient dams that have been repaired. The Association of State Dam Safety Officials (ASDSO) has determined that it could cost up to $18 billion to rehabilitate the back-log of non-federal (those subject to state regulation) high-hazard potential dams that need repair. High–hazard potential dams, should they fail, would most likely cause loss of life and significant economic losses.

To help address these investment needs, the Water Resources Reform and Development Act of 2014 reauthorized the National Dam Safety Program. While ASCE and ASDSO have made advances to promote dam safety programs, increase awareness, provide training, and fund rehabilitation initiatives, there are still significant financial shortfalls. Tell congressional appropriators to fully fund the WRRDA authorized programs. It should not take another Johnstown or a dam failure in Texas and Oklahoma to raise awareness to fund these essential safety programs.

This post is co-authored by Lori Spragens, executive director of ASDSO.

Prev Story: Win One (Gas Tax) for the Gipper Next Story: Adapting Infrastructure to a Changing Climate