The House Subcommittee on Water Resources held a round table this week as Congress gears up to pass a new Water Resources Development Act (WRDA) in 2016. Back in November the committee held a similar discussion in New Orleans. During each roundtable – a less formal setting than a traditional hearing – committee members heard from industry stakeholders on policy matters to consider for the primary legislation that controls the nation’s ports, harbors, levees, dams and flood control structures. In the past, WRDA bills were completed every two years, but congressional gridlock and the ban on earmarks posed significant problems for the bill in the last decade. 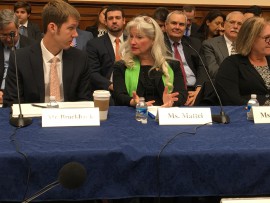 During this week’s roundtable, stakeholders representing the port, inland waterway and coastal restoration industries all expressed optimism on the prospects for a WRDA in 2016. The American Society of Civil Engineers’ President-Elect, Norma Jean Mattei was invited to speak about the poor condition, yet economic significance of the nation’s water resources infrastructure based on the Report Card for America’s Infrastructure. In her remarks, Ms. Mattei noted that the previous WRDA bills created important programs, such as the National Dam Safety Program and Levee Safety Initiative. These programs promote and facilitate the inventory and inspection of dams and levees across the country. Ms. Mattei also referenced several other industries that benefit from WRDA bills. Specifically the ports and waterways that receive federal assistance for dredging and maintenance operations.

A number of policy reforms were offered, including reforming or improving the Sec. 7001 Annual Report process that has replaced earmarks. Instead of receiving project recommendations from Congressional members directly, which was deemed a violation of earmark policy, now the authorizing committee receives recommendations from the Army Corps of Engineers, through a process known as the Annual Report. A project must be include in the Annual Report to Congress for consideration of authorization.

Another resounding message offered by the roundtable participants was the need for better coordination between federal and local sponsors. Concurrent reviews of permits and additional agency staffing were among the suggestions. Finally, the committee was encouraged to look at innovative approaches to project authorization and financing. Beneficial use of dredge material and exploring public private partnerships are all on the table for the committee to consider. Biennial authorization of WRDA bills help cut down on the back log of Army Corps projects and provide the opportunity to update policy to existing programs.