Michigan Legislature Defers to the Public on Gas Tax 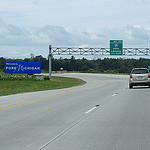 Last week Michigan’s House and Senate leadership worked tirelessly with Governor Rick Snyder to reach a deal before closing out the 2014 legislative session. The House and Senate initially passed differing transportation funding measures. Both would have increased investment in Michigan roads however, the funding methods were vastly different. With neither chamber willing to accept the other’s proposed solution, both plans were scrapped to make way for an alternative solution.

The bipartisan deal brokered with hours left to spare on December 18, the final day of the session, will put a sales tax increase, from 6% to 7%, among other funding measures, in the hands of Michigan voters in a May 2015 election.  In addition to the creation of the ballot measure the law also:

Friday’s vote means that Michiganders who head to the polls in May will be asked to vote on the following:

A PROPOSAL TO AMEND THE STATE CONSTITUTION TO ELIMINATE SALES AND USE TAXES ON GASOLINE AND DIESEL FUEL, ALLOW AN INCREASE IN THE SALES TAX RATE, DEDICATE REVENUE FOR SCHOOL AID, AND REVISE ELIGIBLE SCHOOL AID USES.

The proposed constitutional amendment would:

ASCE supports increasing funding for operating, maintaining, and improving the transportation systems.   While it is not the immediate increase we would have wanted the legislature to enact, ASCE does favor an all-options on the table approach and would encourage Michigan voters to vote “yes” on this critical measure.

Carey Suhan, P.E., president of the Michigan Section of the American Society of Civil Engineers (ASCE) had this to offer:

“After last year’s harsh winter wreaked havoc on Michigan’s already aging and pothole-laden roads, Governor Snyder and the state legislature made positive, bipartisan strides today toward securing additional funding to improve the state’s roads and bridges. Now it is up to the voters to take the final step in May and approve the sales tax increase, which will raise $1.2 billion a year to invest in our transportation system.”

As we head into yet another winter, we encourage you to consider how you will cast your ballot come spring.  “Yes” votes in May will take critical steps toward rehabilitating and modernizing Michigan’s infrastructure!