Texas. The geographically largest continental state, an economic powerhouse for the United States, leading the way in wind power energy production, population growth, and some of the largest infrastructure that has an ever-increasing need for improvement. This is the main theme of the 2017 Report Card for Texas’ Infrastructure, developed by the Texas Section of the American Society of Civil Engineers (ASCE Texas Section). In this update, though several of the infrastructure categories reviewed show areas of satisfactory performance, the clear majority indicate that Texas’ infrastructure lacks funding, proper maintenance, and is poorly equipped to deal with environmental change as Texas continues to grow.

The population of Texas grows by 100 people per day, or roughly one U.S. Congressional District per year. It is the ethical and moral responsibility of the civil engineers of Texas to provide fellow citizens with solid working infrastructure for their daily lives. Too often, we take for granted that our lives are impacted by each of the seven infrastructure categories evaluated in this report card. Most people only think about infrastructure when it is broken. Consider the following:

We expect infrastructure to work effectively but when it doesn’t, we may no longer take it for granted.

As civil engineers in the state of Texas, we have a responsibility to safeguard the life, health, property, and welfare of the public. We believe part of this responsibility includes providing the public and our elected leaders with critical information about the current state of our infrastructure. This is the main goal of this Report Card. With this knowledge, the public will increase support for infrastructure improvement and maintenance. They will subsequently urge elected leaders to take action to prioritize funding, so that our vital infrastructure meets the current and future needs of Texas citizens. 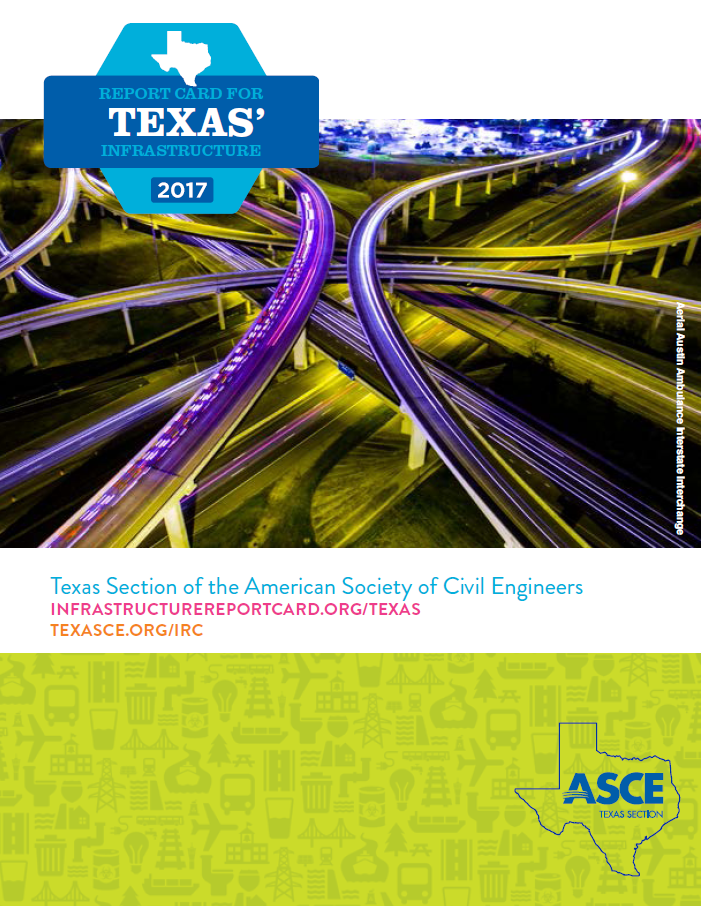 Texas is home to 24 of the nation’s primary/commercial service airports servicing 79.7 million passengers in 2015. The number of passengers (enplanements) at Texas’ Commercial Service airports increased 8.49% between 2010 and 2015. To meet increased demand, Texas has made airport infrastructure investments through construction of new passenger terminal facilities, and renovation and expansion of existing terminals. Additionally, the Federal Aviation Administration (FAA) continues to increase grant funding of investments in Texas airfield infrastructure to improve resiliency and capacity. This increase in funding has resulted in improvement of the letter grade for Aviation from C+ in 2012 to B- in 2017.

There are 53,488 bridges in Texas – almost twice as many bridges as in any other state. Of these, approximately 65% are on-system bridges, or on the designated state highway system, and approximately 35% are off-system bridges, or under direct jurisdiction of local governments such as a county or city. While Texas is well-below the national average in number of structurally deficient bridges at 1.7%, which is a drop from 2.6% in 2012, Texas faces significant challenges when it comes to managing and maintaining acceptable levels of mobility in its road network. Specifically, the state is coping with a reduction of the federal-aid funds available for bridge maintenance, rehabilitation and replacement and an aging bridge stock, with several bridges not meeting functional requirements for increased traffic volumes and loads. Fortunately, the Texas State Legislature recently approved bills establishing fees for permits related to truck size and weight, which help defray the costs of bridge maintenance. This increased funding and drop in percentage of structurally deficient bridges has resulted in improvement of the letter grade for Bridges from B- in 2012 to B in 2017.

The State budget continues to fund the Texas Dam Safety Program to inspect the most critical dams. Funding for this program increased from $2 million in 2012 to $2.5 million in 2017. In 2015 the Legislature provided an additional $15 million to repair or rehabilitate dams built by the Natural Resources Conservation Service (NRCS). However, the inventory of existing dams in Texas continues to age. Since 2012, 217 dams saw hazard classification increases, and the estimated costs of rehabilitation have risen from $380 million in 2012 to $812 million in 2017. In total, Texas has 1,263 high hazard dams of which 80% have emergency action plans, an increase from 10% in 2005. With the Legislature’s desire to improve funding mechanisms and the dramatic increase of high hazard dams with emergency action plans, the letter grade has shown improvement from D- in 2012 to D in 2017.

Planning and funding safe and adequate drinking water supplies is critically important to fostering growth and prosperity as Texas moves through the 21st century. Substantial water challenges will be created by unprecedented population growth projected in the next 50 years, from 29.5 million in 2020 to more than 51 million by 2070. The Texas Commission on Environmental Quality (TCEQ), the primary Texas agency authorized to enforce the rules associated with the federal Safe Drinking Water Act, regulates drinking water for an estimated 6,915 public water systems, which serves 93% of the State’s population. The 2017 letter grade of D+ over the 2012 grade of D- represents a generally improving trend in conservation, technology, planning, management, and overall increases in programs and availability of state funding and financing support.

Texas has a unique combination of geography, geology and climate that can produce both coastal and riverine flooding on a regular basis. Combined with increased populations along the coast and in urban areas along rivers and creeks, flooding regularly causes loss of life and loss of property. Flood preparation, floodplain management and flood prevention are largely the domain of local jurisdictions as the state of Texas does not have a central authority to guide these activities. While the major urban centers have implemented increasingly sophisticated floodplain management programs and flood mitigation systems, the needs of both large cities and less populated counties consistently outstrip the funding and regulations required to provide state-wide uniform, reliable flood mitigation. The lack of a central authority is the primary reason for the 2012 grade of D remaining unchanged.

Texas, with approximately 313,600 total centerline miles of roadway facilities, has more roadway lane miles than any other state. Of these, 26% are on-system, or part of the designated state highway system. The remaining miles are off-system, or under the direct jurisdiction of local governments such as a county or a city. Rural highways in Texas have exceeded their design life and most do not meet current design standards according to the Texas Department of Transportation (TxDOT). The 2015 statewide pavement conditions rated “good” or better was at 87%, but with current maintenance budgets, the percentage of roadways rated “good” will drop to 83% by 2025. Nine Texas cities rank in the Top 100 per the national congestion rankings for annual delay per auto commuter, with two cities being above the national average. In those nine cities, each commuter is paying an extra $890 on average per year due to congested roadways. Because of the anticipated drop in roadways rated “good” and the continued cost of congestion to the commuter, the letter grade for Highways and Roads remains the same from 2012 at a D.

Unauthorized or untreated wastewater discharges continue to be the leading cause of impaired freshwater sources in Texas. 37% of assessed river miles and 43% of assessed reservoir acres in Texas are designated as having impaired water quality. Of the total square miles of estuaries and bays assessed, 13% do not fully support shellfish harvesting and 24% do not fully support aquatic life. As the state’s population grows, increasing demands for water may limit the volume of freshwater reaching the bays as well as alter the quality or timing in which the water arrives, thus impacting the productivity and characteristics of Texas estuaries. The quality, quantity, and timing of freshwater inflow from rivers is important to maintaining the natural salinity, nutrient, and sediment loading regimes which support the unique biological communities of each estuary. This also ensures a healthy ecosystem function. The leading sources of water pollution in the state include municipal sewage treatment plants, agricultural runoff, urban runoff, atmospheric deposition, and unspecified point and nonpoint sources. In addition, wastewater sewers are subject to stormwater flooding overflows, producing a large influx of water to the treatment plant, which overtaxes the infrastructure. The wastewater letter grade is the lone area of decrease on the Texas Infrastructure Report Card, dropping from a C- in 2012 to a D in 2017.

80% of the state regulated dams have an Emergency Action Plan

$8.76 billion in drinking water infrastructure needs over the next 20 years

$86.71 million of unmet needs for its parks system

10,506 miles of freight railroads across the state, ranking 1st nationally

$11.83 billion in wastewater infrastructure needs over the next 20 years

Think about what you can do with an extra $3,300 a year. Narrow that down to $275 each month—a typical car payment. Simplify that number...

In a positive start to 2021, and just a few short weeks following a joint press conference held by ASCE, the Mississippi River Cities &...

After weeks of negotiations, Congress has passed H.R. 133, a bipartisan end of the year package to not only appropriate funding for Fiscal Year (FY)...