Talk to your Members of Congress About Infrastructure this Recess

Members of Congress headed home (and to their respective national conventions last week) and won’t return to Washington until after Labor Day. This gives you, as an infrastructure advocate, the opportunity to talk with your federal lawmakers about our nation’s “D+” infrastructure and specific legislation that they can pass this year to help improve it.

The first is the Water Resources Development Act (WRDA). The Senate version of this bill authorizes 25 U.S. Army Corps of Engineers projects in 17 states. It would also authorize a much needed dam rehabilitation program. The House also has a version of this bill, which has a narrower scope. WRDA bills are most effective when they are passed every two years. Since the last was signed into law in the summer of 2014, it’s time for Congress to pass another bill. If you’re going to see one of your Senators or Representative and want to talk about WRDA, check out this more extensive backgrounder on the WRDA bills S. 2848 and H.R. 5303.

With the passage of the FAST Act last December, many Members of Congress feel like they can ignore surface transportation for another 4.5 years. Help us remind them they can’t! Because the gas tax rate has not kept up with inflation, the Highway Trust Fund (HTF) has been on the brink of insolvency many times in the past several years. Instead of addressing the HTF’s long-term solvency problem, Congress has relied on general funds transfers for the pas

t eight years to prop up the fund, including most recently in the FAST Act. Congress needs to take action to fix the trust fund and ensure its long-term stability. Congressional leaders have been talking about doing a big push on tax reform next year. Remind your Members of Congress to include the HTF. 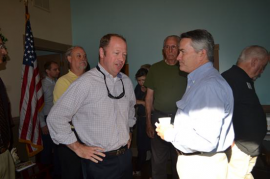 Another piece of legislation important to our nation’s infrastructure is the FAA reauthorization bill. The bill has been undergoing a series of short-term extensions as of late and while a 14.5-month reauthorization bill was just enacted, it did nothing to address our underinvestment in aviation infrastructure. As you travel this summer, there’s a good chance you saw an airport that could use some upgrades—as aviation received a “D” grade in the Report Card. Congress can help fix our airports by increasing funding for the Airport Improvement Program (AIP), which is a major source of cash for infrastructure upgrades. They should also increase or even eliminate the cap Passenger Facility Charges (PFC)—user fees levied by airports you pay when you book a flight. Right now PFCs are capped at $4.50 per trip segment, which hasn’t been modified since 2001. Raising or eliminating the cap would allow airports to invest in themselves to the benefit of air travelers. Ask your Senators and Representative to pass a long-term FAA bill that invests in America’s aviation future.

To ensure our infrastructure has engineers to design, build, and maintain it in the future, talk to your Members of Congress about the Pre-College Engineering Education Act (H.R. 5679). This bill focuses on engineering part of STEM, and would introduce students to modern engineering tools such as computer-aided design while underscoring the value of professional licensure.

If you’re interested of seizing summer recess to talk to your federal lawmakers, here’s a few ways to participate:

Election Day is not the only way to have your voice be heard. Take these next few weeks to share your thoughts with our nation’s lawmakers and tell them it’s time to invest in our infrastructure—because it will save the typical American family $3,400 a year.