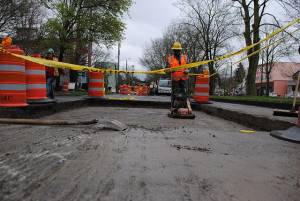 With the end of May approaching and no long-term transportation funding bill on the horizon, a short-term patch will likely be Congress’ next move. If you’re thinking this is de ja vu from last summer, you’re not alone.

#TBT to a year ago when we heard a year would give “the space” to do a long-term bill. It’s time to #fixthetrustfund pic.twitter.com/x5dzY4IGFf

In Missouri, the state gas tax has not been raised in 20 years, despite construction costs rising by 200 percent. Because Missouri has 1,600 bridges that are more than 75 years old, lack of funding is a growing issue. After an emergency bridge closure disrupted traffic flow this week, Governor Jay Nixon encouraged lawmakers to pass a bill that would increase the tax on motor fuels by 1.5 cents and the diesel tax by 3.5 cents. Without action, the governor said Missouri won’t have enough revenue to match federal dollars, which means the state will not see needed repairs, resulting in more traffic, and fewer jobs.

In Nebraska, the unicameral legislature passed a 6-cent gas tax increase over four years, Legislative Bill 610, Gov. Ricketts promptly vetoed the bill, which now returns to the legislature for a likely override. In Michigan, Proposition 1, which would have increased the state gas tax and raised $1.3 billion for road maintenance, was vehemently rejected, leaving Michiganders left with poor road conditions and back at the drawing board to increase investments.

On a positive note, in Washington state, both the House and Senate have passed separate bills to increase state transportation funding. The House plan gives Sound Transit authorization to ask voters for up to $15 billion to extend its light-rail system, and House democrats want to continue using some sales-tax revenue collected from construction projects for the general fund. The Senate plan would authorize up to $11 billion, and would funnel that money back to transportation projects. Right now there is no certainty over which plan will prevail.

Both plans include similar highway, bridge and pedestrian projects and raise about $15 billion over 16 years by gradually increasing the gas tax to 11.7 cents.

Next week is Infrastructure Week, which could not come at a more opportune time as Congress has 22 days until the highway and transit policy expires. It is crucial these conversations lead to action that ensures a sustainable, long-term funding solution to #FixTheTrustFund.