The Federal Role in Infrastructure

February 14, 2013 By: America's Infrastructure Report Card
Back to News 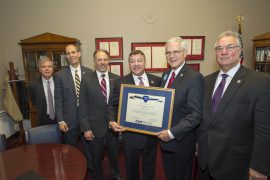 The House Transportation and Infrastructure Committee held a hearing on Wednesday to examine the federal role in infrastructure.  The hearing came the day after President Obama proclaimed in his State of the Union address that that nation must make a commitment to fix the infrastructure that we have.

Chairman Shuster (R-PA) put together an A-list panel, with US Chamber of Commerce President Tom Donahue, LiUNA President Terry O’Sullivan, and Building America’s Future Co-Chair and former Pennsylvania Governor Edward G. Rendell all agreeing that the Federal government must be a key player when it comes to the nation’s infrastructure. The witnesses stated that all funding options, including a gas tax increase, MUST be a part of the conversation because it will be costly to build and maintain the world class infrastructure that is required for continued economic growth.

Infrastructure’s relationship to public safety, national security, and economic competitiveness, makes it clear why a strong infrastructure system has always played a critical role to the federal interest. In fact, infrastructure spending and the federal government have a history that dates to Article 1, Section 8 of the U.S. Constitution that gave Congress the power to “establish post offices and post roads.” The country has expanded significantly since that time, and with it the nation has needed to expand its infrastructure in order to maintain a modern economy.

During the 20th Century, the federal government led the way in building our nation’s greatest infrastructure systems from the Intercontinental Railroad, to New Deal programs, to the Interstate Highway System, and the Clean Water Act. Since that time, federal leadership and investment have decreased, and the condition of the nation’s infrastructure suffered. Unfortunately, according to the Congressional Budget Office, the total of all federal spending for infrastructure has steadily declined over the past 30 years.

As the Committee begins work in the 113th Congress, our nation’s infrastructure will require significant attention. Congress has not reauthorized a Clean Water Act since 1987, a Water Resources Development Act (WRDA) since 2007, and the Passenger Rail Investment and Improvement Act will expire in September. The National Dam Safety Program has not been reauthorized since it expired in 2010, and, surface transportation programs while authorized through 2014 still require a sustainable revenue source for the Highway Trust Fund to be viable in the future. Each issue also acts as an example for why the federal government must continue to play a role in funding different facets of our nation’s infrastructure.

ASCE submitted a statement for the hearing, which outlined the economic benefits from a well-functioning infrastructure. ASCE’s Failure to Act reports have found that 3.5 million jobs would be at risk by 2020 if we do not increase investments and that there would be a loss of 3.1 trillion in GDP. Additionally, the current investment shortfall of $1.6 trillion would grow to $2.7 trillion over the next 7 years if we do not increase infrastructure investments now. By improving the nation’s deteriorating infrastructure system both economic and job creation opportunities will be provided, while creating a multi-modal transportation system for the Twenty-First Century.