February 20, 2015 By: America's Infrastructure Report Card
Back to News 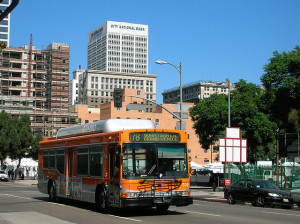 On Wednesday morning in Los Angeles a water main broke that was installed in 1926, causing flooding and damage to nearby buildings and roads. According to The Times’ analysis of LA Department of Water and Power (DWP) data, Los Angeles’ system of water pipes has averaged nearly 1,200 leaks a year since 2010, and water main leaks and breaks occur on average about three times a day across the city.

Vice President Joe Biden and Transportation Secretary Anthony Foxx recently returned from a tour through five states to promote the Grow America Act, which would invest $478 billion in infrastructure across the nation. It would be partly paid for through a one-time tax on currently untaxed corporate earnings, is considered by Biden and Foxx to be a bipartisan funding initiative and critical to economic growth and job creation.

In absence of federal funding solutions, many states have come up with innovative ways to fund local transportation infrastructure. Aside from raising state gas taxes, which Iowa and Utah legislatures are in the process of doing, there have been innovative technologies to help improve safety and make trips easier.

For example, the Minnesota Department of Transportation (MnDOT) has created an app that would assist the visually impaired to get around the city by navigating them and helping them avoid construction sites, as many are left to navigate the cities by foot due to lack of sufficient transit[MB1]  In Los Angeles, a new app was launched to allow riders to pay for the commuter buses via their mobile phones with the aim of promoting more ridership on public transit.

Regardless of innovative transportation improvements and state gas taxes, The Highway Trust Fund is headed towards insolvency in a matter of months. It’s imperative that members of Congress work together to pass legislation that will provide a sustainable, long-term funding solution to #FixTheTrustFund.