This Week in Infrastructure: What is the State of Our Union, Really?

February 02, 2014 By: America's Infrastructure Report Card
Back to News

The Super Bowl (or the first mass-transit bowl as we like to call it) wasn’t the only required TV viewing this week . The State of the Union drew more than 33 million viewers listening to President Obama’s agenda for the country. Here at ASCE, we were pleased that President Obama laid out goals of “rebuilding our roads, upgrading our ports, unclogging our commutes” and hope that Congress responds by finalizing WRRDA and passing a transportation bill.

ENR has an excellent overview of the response from the major players of infrastructure.  Looking locally, the Detroit Free Press chimed in with ways that a focus on infrastructure could help Michigan.

Prior to his speech, our friend Rep. Blumenauer authored his thoughts Monday on how “If we do not act now to maintain and repair our infrastructure, we will face much higher costs in the future, not just for the country, but for families on a daily basis,” echoing ASCE’s concerns from our Failure to Act studies. 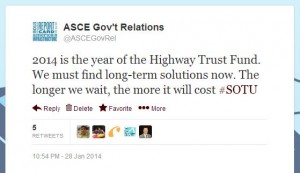 Beyond that, the recent chemical contamination of West Virginia’s water  has led to a larger conversation about water quality and the infrastructure that delivers it and disposes of it.

Also this week, there was also some talk of the power grid’s vulnerabilities (which received a D+ in the 2013 Report Card for America’s Infrastructure).  Even MetLife Stadium is taking precautions to ensure last year’s blackout is not repeated this Sunday.

Finally, we are going to keep praying for all of our friends in Atlanta. Certainly this was a horrific situation, and hopefully all of us can learn how to avoid such a thing in future.

So, what is the State of Our Union’s Infrastructure, really? I guess you could say we’re working on it.

Prev Story: Bipartisan Governors Coalition Presses Congress to Act on Transportation Funding Next Story: This Week in Infrastructure: A Call to Action