We’re Telling You First — the Save America’s Infrastructure App Is Here! 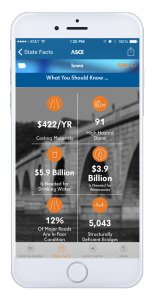 While around these parts it’s infrastructure 24/7/365, national Infrastructure Week now in its third year is a great opportunity to highlight the importance of infrastructure to the economy and the great strides being made to prioritize investment and renewal into our roads, bridges, ports, water pipes and other infrastructure.

As part of Infrastructure Week, today ASCE is releasing a new phone app. Help save America’s roads, water pipes, airports, and more by telling your elected officials to get to work on raising America’s infrastructure grades. Whether it’s an issue in your state or nationally, the new app will remind you when it’s critical for your elected leaders to hear from you.

Enter your zip code to find out how many structurally deficient bridges there are in your county and how your state compares to the nation overall. The app for iPhone and Android includes infographics, videos, national and state data, and news. It then enables you to take all that information and do something about it in the Action Center. Through the app you can contact your elected leaders with just a few taps and let them know that you expect their leadership in making infrastructure renewal a priority.

Our nation’s infrastructure most recently received a “D+” in the Report Card for America’s Infrastructure. This app gives you the opportunity to share the stats of our aging infrastructure with your social networks and elected leaders, to help increase awareness of these often “out of sight, out of mind” issues.

So download the new app right now for your iPhone or Android phone and join in (or continue) the effort to save America’s infrastructure as a way to celebrate Infrastructure Week from anywhere.