Win One (Gas Tax) for the Gipper

May 27, 2015 By: America's Infrastructure Report Card
Back to News 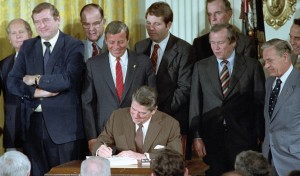 Summer reading lists of those in Washington, D.C. policy circles tend not to reflect titles that rank highly on the New York Times bestseller list. Case and point is a new work by Eno Center for Transportation senior fellow Jeff Davis, titled “Reagan Devolution: The Real Story of the 1982 Gas Tax Increase.” In the piece, Davis provides an excerpt from Reagan’s Saturday, Nov. 27, 1982 radio address where the president stated, “What we’re proposing is to add the equivalent of five cents per gallon to the existing federal highway user fee, the gas tax. That hasn’t been increased for the last 23 years. The cost to the average motorist will be small, but the benefit to our transportation system will be immense.” Reagan signed the gas tax bill on January 6, 1983.

Much of that lore is known and has been repeated in recent years by ASCE and others as a symbol of leadership that existed during a time of heightened bipartisan understanding. However, Davis paints a more nuanced view, supported by primary documentation from President Reagan’s Simi Valley library and conversations with former Reagan staffers. The truth is that when it came to transportation, Reagan was both a pragmatic bipartisan deal cutter and limited government ideologue at the same time and certain policies, such as the enactment of the 1982 gas tax hike, bring this to light. The rubber met the road so to speak when following his 1982 State of the Union address where Reagan announced grand plans to block-grant a large portion of the federal budget including transportation programs to the states, Davis outlines that, “Negotiations with state governors and city and county officials over the specifics went poorly,” and Reagan was forced to abandon those efforts.

Echos of the debate between raising the gas tax and devolving the federal program to the states ring as current today as they did in 1982. While the faces have changed and the party positions might be a bit altered, the national challenge that faced President Reagan and Congressional Democrats remains the same: How can the nation improve its transportation system and raise revenue for this cause in a way that can generate bipartisan support from federal, state and local lawmakers.? With the looming deadline of July 31 hanging over the fate of the current federal transportation program, let’s hope that today’s decision makers dive into this summer read and get to work on a solution quickly to #FixtheTrustFund.