Today, Montana is thriving from growth in the economy, a successful tourism industry, and grassroots entrepreneurship. A key component to our growth and future success is our infrastructure. Although the major cities in our state might be feeling these benefits more than other areas, it is important that we invest in infrastructure in all corners of the state to continue this upward trend. This includes investment in transportation, energy and clean water distribution systems, and wastewater collection. Infrastructure is the glue that holds our cities, towns and communities together and keeps their hearts beating.

Montana’s vast expanse and low population density offers a unique challenge: more miles of infrastructure to fund with less taxpayers to do so. This often leaves less populated areas grappling with severe underinvestment, and aging and neglected systems. Investing in infrastructure will ensure economic stability in our rural areas and improve our residents’ well-being. 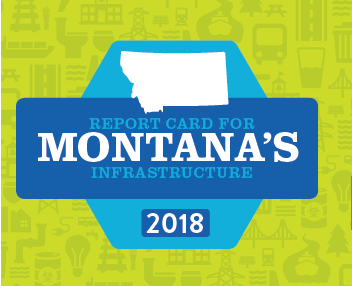 Montana oversees 4,471 public bridges with an average age of 44 years, including 2,484 state-owned structures and 1,987 locally-owned structures. Based on 2018 Montana Department of Transportation (MDT) data for National Highway Systems bridges, Montana’s total bridge deck area is 11,179,380 square feet, 7.3% of which is rated as poor/structurally deficient. The 2017 passage of a fuel tax increase bill has provided the state with additional funding for maintenance, preservation, rehabilitation, and bridge construction. The $9.8 million annual increase in revenue allocated to the MDT will allow the state to fully match the funds apportioned to Montana through the Federal Highway Administration. With this very recently increased revenue stream and the prioritization of deck-only projects to stretch the available funding, the worsening condition trend indicated in the 2018 Report Card should slow, if not reverse. However, additional revenue will be needed to restore the level of state-funded projects from years past.

Montana has over 64,000 reservoirs, although only 3,259 dams are large enough to be recorded in the National Inventory of Dams preliminary 2018 database. Montana’s high hazard potential dams – dams that, should they fail, have potential for loss of life downstream – are generally in good condition, regardless of which regulatory agency provides oversight. The majority of high hazard potential dams are regularly inspected and have emergency action plans (EAPs) in place. Eighty seven percent of state-regulated high hazard dams have an EAP. However, smaller structures, which account for the vast majority in the inventory, are subject to fewer inspections and rarely have EAPs. It is exceedingly rare for a properly inspected and maintained dam to fail. Inspection frequency, condition, and attention to maintenance varies according to regulatory agency with oversight and dam ownership.

Montana’s 2,162 water systems are operated by both public and private entities. Various water treatment, distribution, and storage systems support over 1 million residents, as well as the state’s vital tourism and recreation industries. Several of Montana’s large cities have made major upgrades to their water treatment plants and distribution systems in recent years. However, statewide, the Environmental Protection Agency reports that Montana will need $1.15 billion in funding for identified immediate water infrastructure improvements over the next 20 years. Meanwhile, the total annual investment by both large and small communities for both water and wastewater projects in Montana is typically between $160 and $170 million. A significant increase, as much as 50% to 100% of the current level of funding, is needed to bring the water infrastructure replacement rate in line with its service life. Also of concern is the state’s aging water certified operator workforce; approximately half of workers are over 55 years old and there is a need to focus on recruiting and training younger operators.

Montana’s power generation comes from a number of different sources including, coal, petroleum, natural gas, hydro, and other renewables such as wind and solar. Montana produces approximately 27,800 MWh of electricity annually, while consuming only 13,900 MWh of electricity. The excess power is generally exported to the U.S. West Coast. Montana ranks 38th in the nation for residential electrical rates. Most of Montana’s energy infrastructure is owned and operated by private entities and thus, is not reliant on government funding. However, there is still indirect funding needed through loans and bonds to support the maintenance of existing systems and prepare for future needs. Montana’s transmission network suffers from a number of issues, including congestion and age; the state’s main artery for power flow is almost 40 years old. Meanwhile, Montana’s other energy resources that drive the economy, such as coal, oil, and gas, rely on public investment for many things including right of way

Montana is a large remote state with considerable distance between commodities, economic hubs, and manufacturing facilities. Montana’s railroad system includes approximately 3,376 miles of track owned by Class I, Class II, and Class III railroads, and is essential to the state’s economy. The rail system is primarily utilized for freight rail purposes. However, some of the track is used for both freight and passenger services. Considerable private and public investments have been made to Montana’s railroad infrastructure in recent years and as a whole, the infrastructure is in good condition. Congestion along some of the main corridors is becoming an issue and the railroads are currently initiating projects to increase operational efficiencies.

Montana’s roads are among the least crowded roadways in the country and efficiently move $101 billion in goods by truck and millions of travelers by car each year. However, 46% of the major roads are in poor to mediocre condition. These rough roads cost each Montanan approximately $385 per year in extra operating costs. It is estimated that $15 billion is needed to maintain Montana’s roadway system over the next 10 years, but projected funding can only meet 33% of those needs. Also concerning, Montana has the eighth highest fatality rate in the nation. In a move in the right direction, Montana legislature recently approved new revenue for roads, providing an additional $30 million annually for the state’s transportation network, helping to close the investment gap.

Montana has more than 145,000 students attending public K-12 schools across the state. The average age of school facilities is 53 years and 68% of schools were built prior to 1970, creating an inventory of aging structures needing repair and renovation. While funding has been obtained to
address serious safety issues, revenue for the Facility Reimbursement Program was reduced in 2010. Meanwhile, facility needs are growing, creating funding gaps for items such as damaged or worn out systems and facilities, codes and standard violations, and energy costs. As energy costs continue to rise and student populations grow, school facilities face even larger funding deficits while trying to provide a safe, healthy, and productive educational environments for communities.

There are 32 Municipal Solid Waste Landfills (MSWLs) in Montana, handling approximately 1.6 million tons of solid waste annually. The state’s facilities have approximately 38 years of capacity remaining. Additionally, since most of the MSWL facilities were either constructed or received significant upgrades in the last 25 years, the overall condition of the infrastructure at the landfills, including on-site roads, stormwater controls, and equipment buildings is relatively good. Should infrastructure improvements be required, customers are charged, typically through property taxes, monthly billing, or pay as you throw programs. One area of improvement is diversion rates; the state diverts 21.9% of the solid waste it generates, significantly below the national average of 34.3%. Another area of concern is the condition and safety of rural transfer stations.

In the past five years, Montana has reached a stormwater “turning point,” with seven regulated cities collecting and allocating millions of dollars toward infrastructure and staff investments to better manage their stormwater programs. For example, regulated cities have created over 15 dedicated positions tasked with developing and running stormwater facilities. As another example, the City of Bozeman is spending $5 million to replace nine miles of pipes in its storm sewer system. However, Montana as a whole is trying to catch up after years of underinvestment. Increased funding, more quality-based projects, and broader regulations that cover all pollution contributors are needed.

Municipalities and districts own and operate approximately 229 public wastewater systems in Montana, serving approximately 62% of the state’s population of 1,050,000 people. The remainder of the population is served by private septic tanks and drain fields. Many of the largest municipalities in the state have recently completed major upgrades and approximately 25% of the state’s population is benefiting from these improvements. However, other plants need equipment upgrades and pipe replacement. Montana needs $363 million in funding for identified wastewater infrastructure improvements, but the current total annual investment is estimated to be between $160 and $170 million for both water and wastewater, leaving a significant investment gap. An increase from the current funding levels is needed to replace or update failing and substandard piping and treatment plant components and to reach a satisfactory replacement rate.

86% of the state regulated dams have an Emergency Action Plan

$1.15 billion in drinking water infrastructure needs over the next 20 years

$200 million of unmet needs for its parks system

3,719 miles of freight railroads across the state, ranking 12th nationally

$363 million in wastewater infrastructure needs over the next 20 years

From the horse carriage to the invention of the automobile and now the development of connected and autonomous vehicles (CAV), technology continues to redefine how...

The nation’s ports got a little love in the recently passed CARES Act, the colossal stimulus package that provides COVID-19 relief. In this legislation is...

Safe and accessible drinking water. Properly treated wastewater. Reliable electricity that keeps the lights on. Ports and airports to move goods through the country and...